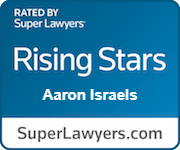 DAVID P. NEUMAN ELECTED TO PIABA BOARD OF DIRECTORS

Israels & Neuman, PLC is proud to announce that one of its managing partners, David P. Neuman, has been elected to the PIABA (Public Investors Arbitration Bar Association) Board of Directors.

Since its formation in 1990, PIABA has promoted the interests of the public investor in all securities and commodities arbitration forums, while also advocating for public education regarding investment fraud and industry misconduct.

At PIABA’s 2015 Annual Meeting, Mr. Neuman was elected to one of the opening seats to the Board of Directors.  Directors generally serve three year terms.

As a member of the PIABA since 2007, Mr. Neuman currently serves as the Chair of the Legislation Committee, has served as Co-Chair of the SRO Committee, and was an editor for the PIABA Bar Journal.  Mr. Neuman also received PIABA’s Outstanding Service Award in 2014.

David P. Neuman is a partner in the law firm, Israels & Neuman PLC in Bellevue, Washington, where he represents individuals in securities arbitration cases. He was admitted to practice law in the State of Illinois in November 2005, the State of Florida in April 2010, and the State of Washington in 2014.